When the worship began, I broke. I am talking about that full-blown, sobbing, tear-soaked, sloppy kind of crying. I was in Honduras watching Antonio, my adult adopted son, speaking in front of a hundred people gathered for church.

I met Antonio when he was twelve.  He showed up at the church where I was a youth pastor for a couple of hundred rambunctious junior high students.  He didn’t want to be there.  He had enough abuse in his life that the concept of God as father was as likely as Santa Claus. Our volunteers could see he was hurt, quiet, and a special kid. 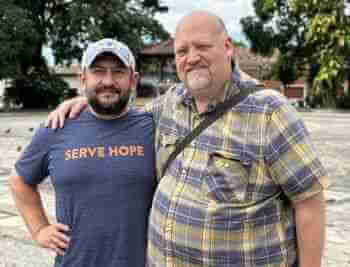 Antonio had been illegally brought into the U.S. by his mother when he was six. She wanted him to have a better life.  His home life in America was not much better than in Honduras, but his opportunities for a future were abundant.  When Antonio entered the youth group, he wouldn’t even look at us.  When he left three years later, he was the kid who hugged everyone.

We lost contact for a few years as he moved with his family, state to state, to remain one step ahead of immigration. At the age of sixteen, he was back in Dallas.  He gave me a call. By this point, I was a youth pastor at another church. He began attending with our family and becoming a regular at the youth group. But his concept of God had only hardened. He wanted the community, not the theology.

When he was sixteen, he joined me on a mission trip to New Orleans. He worked hard when he served and played hard when we explored. He did not participate in worship or Bible study. On our last night, I watched Antonio challenge God out loud in our gathering, shocking everyone. I then watched the Holy Spirit embrace him in all his anger, doubt, and fear. I witnessed Antonio fall to his face as the arms of God embraced him, reminding him that He’d never been abandoned and that love was abundant in his life.

In that moment of wonder, Antonio became a follower of Christ. When we returned home, he moved in with us, becoming a part of our family.

Thirty years later, as we traveled back to Honduras for the first time since he was six, I watched him share that story with a weeping congregation. I wept harder than anyone as I replayed his story in my head, recalling the unlikely moment of wonder that changed everything in Antonio’s life. Today, Antonio leads trips for Wonder Voyage, watching kids have similar encounters.

Last year was our biggest, best, and most chaotic ever. Regardless of the new world of travel we live in, God continued to move in the hearts of the hundreds who traveled with us. I end 2022 with more gratitude than ever.

Who knows what 2023 will bring?  What I do know is wonder changed everything.