Skip to content
Menu
An Amazon Adventure – Part I

As I disembarked from the airplane into the jungle-walled town of Iquitos, Peru, I wrote in my journal: This is insanity. I’ve finally tipped over the edge. I’m about to vanish into the Amazon jungle for two weeks, be exposed to God knows what, and be out of range of any modern communication. If I disappear, or worse yet, die, my family may never retrieve my body.

Even though I had been to dozens of countries, the Amazon had remained off the grid. I joined a few traveling buddies on an impromptu Amazon River voyage from Iquitos to the Tres Fronteras, where Columbia, Peru, and Brazil meet. This was my opportunity to fulfill a twenty-five-year-old dream that dropped into my heart the first time I saw the opening scene in Raiders of the Lost Ark.

We scoured the town in search of a crew to take us downriver. Iquitos, an out-of-the-way-on-the-edge-of-the-world town, draws the ultra-adventurous isolationists and fugitives. As crickets serenaded the setting sun, we sauntered through noisy streets into the town square, where a bluish hue emanating from the Cathedral Tower set a melancholy hue. We traveled on trust, with no set agenda, re-stoking our faith in the inevitability of things working out. Our inquiries led us to the Yellow Rose, owned by a bighearted ex-pat Texan. After hearing our crazy idea, which didn’t phase him in the least, he arranged a meeting with a local captain for us.

Percy, our indigenous guide, ran a small but professional outfit. As a Kampa Indian, he was deeply connected to the Amazon, her people, their stories, and the environment. It only took five minutes of negotiations before we asked him to be our captain and guide.

The next morning Percy took us to our home for the next two weeks: a baby blue, forty-foot-long, eight-foot-wide canoe named the Valiente. Designed to cut the water with ease, the Valiente’s tin roof, crowned with braided banana leaves, repelled the brutal midday sun and the inevitable afternoon downpours. Under benches running the length of her narrow sides were food and water stores. Our luggage was placed in the middle of the boat, and other equipment to act as a ballast. The stern held fuel, tools, and a makeshift kitchen where nightly Peruvian delicacies like juane, macambo beans, inga fruit, and roasted palm grubs were prepared.

Launching out from Iquitos, we sailed northeast on the Amazon. In the cool of the day, I sat on the bow of the boat with my legs hanging over the port and starboard sides. My feet cut the black water while I devoured the constantly changing downstream vistas. The bow of the Valiente was the exact spot a thirteen-year-old boy, watching his favorite movie, had longed to be.

Our adventures were as numerous as the bug bites covering every inch of our exposed skin. We landed on Monkey Island, a sanctuary for hundreds of simians tamed as pets and then abandoned.  There was the thrill of confronting an angry sixteen-foot striking anaconda with a head the size of a football. We shared an emotional breakfast with the chieftain, who told us the story of his tribe’s long walk to freedom from European slavers. But the astonishing memories we were cataloging were not without a price.

To protect our bodies from any more mosquito abuse than we were already undergoing, we slept in windowless thick canvas tents, which meant no airflow. As an extra precaution against malaria and dengue fever, we slathered ourselves with an oily Crisco-like bug repellent. As I lay there on our first broiling night, feeling like a roasted chicken while listening to the grunts and groans of my fellow travelers trying to sleep, one of my buddies, who was growing more miserable by the hour, began to grumble from his tent.

“I feel like I’m trying to sleep in a stomach.”

Our laughter ruined any chance we might have had for a few hours of rest. Laying in a pool of greasy perspiration, I couldn’t picture anyone I knew who might enjoy this experience as much as me. Here I was, abandoning all creature comforts, all assurances of what the next hour might unleash, and embracing physical discomfort as a gift from the heavens. The dichotomy of a soft bed, predictable meals, and brainless media blitzing compared to the joy of unpredictable, risky, beyond-my-control curiosity were as dizzying as the chaotic, biologically opulent jungle I was floating through. 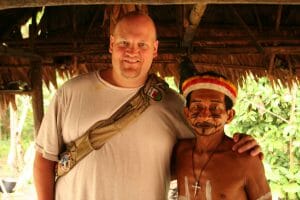 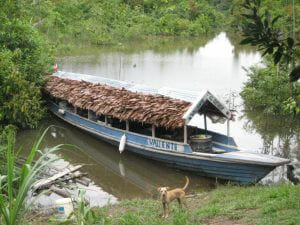 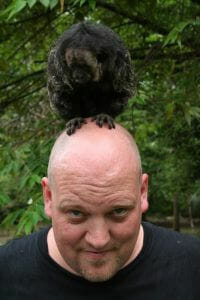