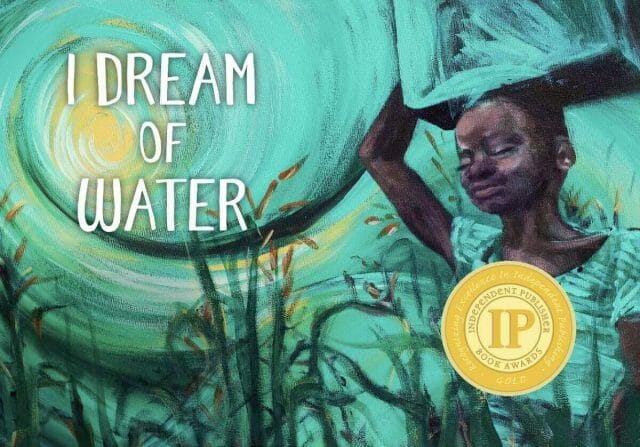 This year, Wonder Voyage Executive Director Shawn Small entered his first children’s book I Dream of Water into the Children’s Picture Book category of the Independent Publishers (IPPY) Awards. He and illustrator Jenny Robbins had previously won IPPY bronze and silver for their devotional guides The Via Crucis and Via Advent.

“I had a good feeling about I Dream of Water taking home an IPPY,” Small said, “so you can imagine my disappointment when we weren’t on the winner’s list for our category.”

A couple of weeks later, Small was packing for a trip when an email came in asking why he had not acknowledged his award.

With a bit of a pout, Small checked the children’s book winner’s list… again. Then, he looked beyond just his category.

To his amazement, I Dream of Water was named the 2022 IPPY Award for the book “Most Likely to Save the Planet.”

“This is not a category you can enter a book into. The IPPY committee hand-picked I Dream of Water from over 5,000 entries. It was completely unplanned and unexpected. It’s a tremendous honor.”

According to the judges’ feedback, “I Dream of Water is a book that sticks with its readers and reminds us all of our connection and responsibility to one another and Mother Earth.”

Small wrote the book for Water is Basic, a non-profit that has built 500 wells to provide clean water to over 1.5 million people in South Sudan.

“The final project was more than a children’s book,” Water is Basic President Steve Roese said, “it was a work of art.”

The next step for the team is to get 5,000 copies of I Dream of Water into elementary schools.

“We want to change the point of view of an entire generation,” Roese said.

“It has been my honor to use my art as a force to help others,” Robbins said, “and I’m beyond excited to see this project grow and bring water to even more villages.”

Since the responsibility of gathering clean water usually falls on girls and women, Water is Basic is investing in helping women be the biggest part of the solution.

“It’s a radical idea that has never been done before,” Roese said. “We are investing in training women to maintain the wells. Each woman is her own small business owner.”

Ultimately, Roese would like for there to be enough women trained that every well that malfunctions could be fixed within a day.

“Solving the clean water problem is just the first rung on the ladder to hope and freedom,” Small said. “And the award gives I Dream of Water the credibility we need to further the cause.”